Do you know your loonies from your toonies?

Although you will probably use your debit cards or credit cards more, knowing your Canadian coins and bills is basic knowledge you can’t do without.

Did you know that all Canadian coins are made in Manitoba? The Royal Canadian Mint produces over one billion circulation coins every year at their plant in Winnipeg. It also makes coins for central banks, monetary authorities and other mints all over the world. 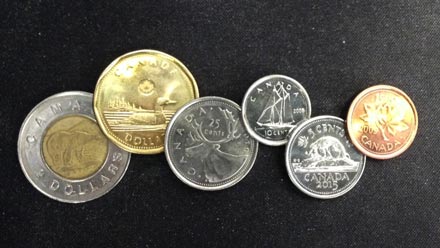 If you look at a coin, you will notice that on one face is the monarch’s effigy, which is a permanent fixture. On the reverse side are designs usually featuring Canadian wildlife. This side has changed through the years reflecting the shifts in Canada’s diverse culture (the history of Canada’s coins, Royal Canadian Mint).

The one dollar is known as a “loonie” because of the image of the common loon on one side. The two dollar coin is of course known as a “toonie” (as it is equivalent to two loonies). Other coins in current circulation include the 5¢ (nickel), 10¢ (dime), 25 ¢ (quarter), 50¢ (50¢ piece – limited circulation), and the 1¢ (penny) which ceased to be distributed in 2013. The penny is being phased out but is still considered legal tender.

Canada has five bills or banknotes that are produced by the Bank of Canada. The denominations are five (blue), ten (purple), 20 (green), 50 (red) and 100 (brown) dollars. In November 2018, a new $10 bill was launched into circulation featuring Viola Desmond. You can see the new bill here.

Images shown with permission from the Bank of Canada

Canada’s newest batch of bank notes are made out of polymer, a material that is much more durable than cotton paper. This is good for the environment as the bills last longer and can even be recycled. The new polymer notes are hard to counterfeit as well because of the “detailed metallic imagery carried in the transparent area of the notes” (Bank of Canada, benefits of polymer). The bills’ design also features various Canadian achievements at home, around the world, and in space.

Canadian money is generally called Canadian Dollars (symbol: CAD). You will usually see it abbreviated as CAD, C$ (to distinguish it from other dollar-denominated currencies) or CDN. The Canadian Dollar is considered to be one of the most traded and accepted currencies in the world because of the country’s stable economy.

Know more about Canada’s monetary policy at the Bank of Canada site.

The Government of Manitoba has a Financial Literacy Resource page for new immigrants that has links to consumer education information.

You have already completed the quiz before. Hence you can not start it again.

You must first complete the following:

Quiz complete. Results are being recorded.

We'd love to hear from you!

Please login to tell us what you think.

Taxation can be a very difficult and overwhelming topic. The goal of this workshop is to make it a little… Read more »

Preparing yourself for retirement in Canada

Getting financially ready to retire in Canada is one thing, but there’s a lot more to it that that. Come… Read more »

The importance of having a will

we have all heard that it’s important to have a will, but why? Come to this workshop and find out!

The importance of having a will

Having a proper well could save you and your family from financial disaster. Join this workshop to discover the importance… Read more »

To report an error…

We do our best to keep our content accurate and up-to-date. If you see an error here, please use this form.